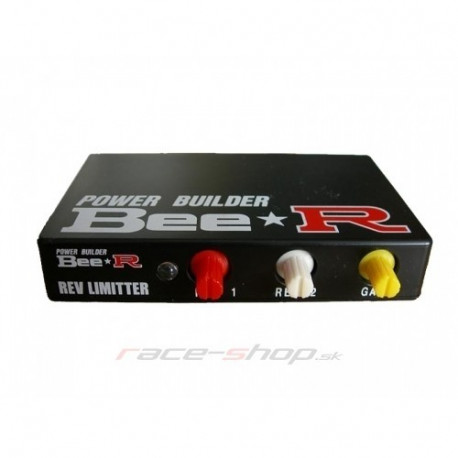 The original speed limiters, when reaching a certain limit, disconnect fuel (fuel cut) and may cause damage due to too poor a mixture. Sensitive are especially modified atmospheric engines and all engines with turbo.

Bee-R the limiter stops the ignition when reaching the maximum speed so that the mixture can not be degraded as with a conventional limiter. This is often used in motor sport (WRC, F1).

Bee-R the limit switch is fully adjustable in 500 rpm increments from 2500 to 10,000 rpm. It allows you to set 2 levels of speed limitation.

REV 1: the value is selected by the red potentiometer. The main speed limiter is set, that is the classic limitation of the maximum driving speed (depending on the type of engine, for example, set at 7000 rpm). This means that the engine will under no circumstances exceed this speed limit.

REV 2: the value is selected with the white potentiometer. The so-called " low limiter. This limiter is activated by pulling the handbrake or other switches and can be used as a launch control.

It is set to the value at which the engine allows for the fastest start from the spot (mostly set at the torque peak). For example, set to 4000ot.

This means that after pulling the handbrake and compressing the accelerator pedal on the floor, the speed will be around 4000 rpm (see video below). This allows a faster start of the car and the full engine power transfer (turbocharged engines have a pressure increase that is not possible when the engine is turned neutral).

GAIN: the yellow GAIN potentiometer is set to the time that the coil resumes after disconnection. When reaching max. the revolutions limit either REV 1 or REV 2 will disengage the ignition, the longer the engine will be without the spark, the more gasoline will accumulate in the cylinders and will be ignited after being reconnected. In particular, exhaust and flame shooting (more gasoline in the cylinder = bigger flame) - see the video below.

Suitable for 4 and 6 cylinder engines. See below. Not suitable for V8 engines.

Before ordering, please select the limiter type based on the type of engine:

Type B is suitable for the following types of engines:

WARNING! improper use may result in engine damage! We recommend that it be installed only in specialist workshops! In use, the catalyst may be damaged.

You can use OMEX.

2 other products in the same category: